If you can’t beat them, join them: Remainers try their hand at attacks on the civil service.

Civil servants do not need this unsolicited advice, foghorned over Twitter.  The tweet comes out of nowhere, prompted by nothing in particular, and insinuates in a way full of foreboding by omitting reference to anything specific.  Presumably, if there were some specific allegation, it would have been made?

It is the mirror image of the accusations by the Brexit Ultras that the civil service is run by ‘Remoaner Saboteurs’, of which the latest example in the genre was this: 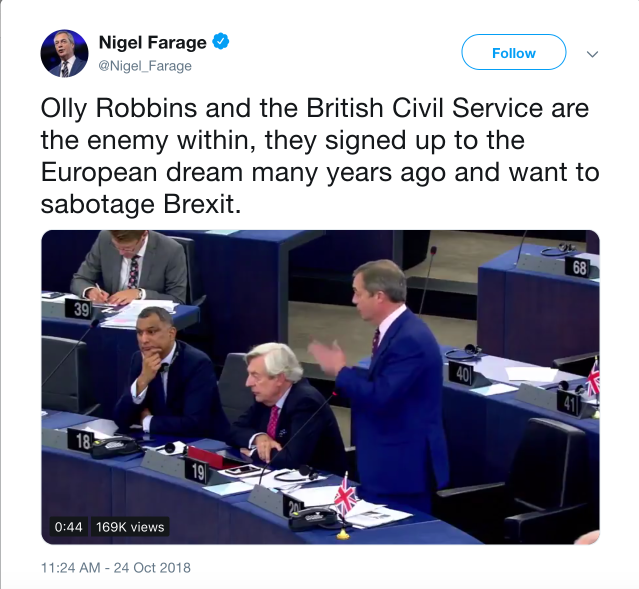 ‘Don’t do anything ethically dodgy’ we are intended to read thus: ‘As someone in the know I have good reason to suspect that ethically dodgy things are being done or may be done if I do not broadcast my warning.’  There is an explicit code of conduct for civil servants.  And a management and whistleblowing structure for enforcing it.  But for some reason we need a tweet from Lord Adonis to set things straight?

It ought not require saying, but Brexit is the official government policy [unless you believe some of the most extreme Brexit conspiracists’ explanation for why things have gone so badly].  And so civil servants should embrace it with the same enthusiasm and energy and initiative that they would bring to the evaluation and implementation of any other government policy.  Even if Brexit is, as I have often emphasized in these pages, a bad policy.  [At least in terms of economics].

Civil servants also have a right to look after their own careers, and try to exert as much influence on what they work on as they can, if their rewards from work depend on that.  But inciting a boycott – ‘have nothing to do with Brexit’ Adonis advises – will do nothing to help them do this and will probably poison the atmosphere, making it harder to manage work choices.

This intervention also harms the cause of those trying to halt or soften Brexit, by allowing the cause of unlawful [and therefore unpatriotic] sabotage to be laid.  So from Adonis’ perspective – he being a leading anti-Brexit campaigner – his comments are self-defeating.  It could also be regarded as somewhat ironic that a proponent of conservatism in the face of the Brexit revolutionaries – someone who wants to restore the pre-referendum status quo in the UK – should be trying to undermine the institution of the civil service that was a part of what made that status quo work.

We are not that many steps away from demands that civil servants be vetted for political fealty.  The UK is going to place very great demands on its civil service in the years ahead, however Brexit turns out; and a convulsion caused by a significant loss of faith in its impartiality would be very damaging.

This entry was posted in Uncategorized. Bookmark the permalink.